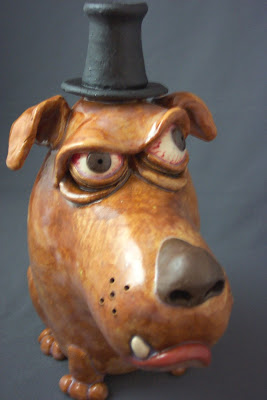 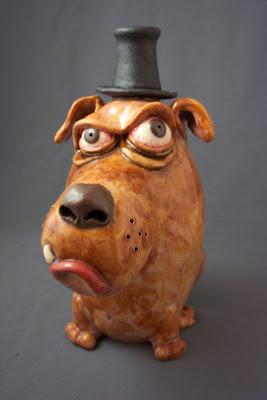 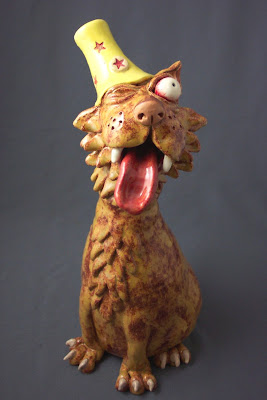 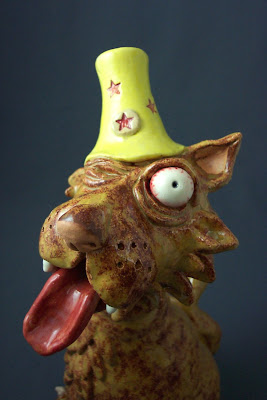 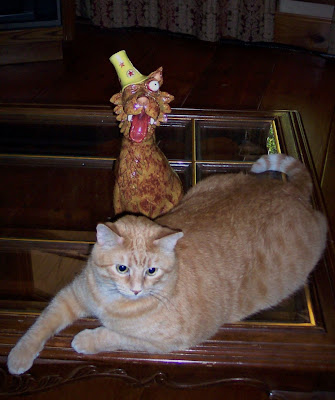 Tom's a bad influence on Rascal.
Tom is bigger than he looks. Rascal is a 25# cat!!
Posted by Wildmud at 1:27 PM No comments: Links to this post

It's been 100f. or more each day for the last month and it appears it will continue for at least another month. I decided to find an inexpensive way to cool the studio to a decent working temperature.
It has been hot but the humidity has been lower than previous summers so I decided to build a "Swamp" cooler. The real challenge was using mostly things I already had for construction.

This is an evaporative cooler. It works by circulating water through a media that will absorb water then drawing air through the wet media, thereby cooling the air. (think of rain cooled air). After designing a cooler and building it inside a trashcan (with panels cut out of the trashcan to admit air), I realized that the trashcan was just hurting the efficency. I needed to expose as much wet media to the incoming air as possible. It occured to me that the same techniques we use to build Raku Kilns would also work for a  cooler. By using a round cylinder of wire I could expose about 15sq. ft. of wet media to the air in just about a 2 ft diameter space.

I wrapped the smaller cylinder with aluminum screening then wrapped it with 2 layers of aspen excelsior landscape mulch. (Used for seeding grass and providing mulch. Also great for reducing Raku ware) A big roll can be found at Lowes or Home Depot for about $20.

I wrapped the inner cylinder in more screen wire to hold the excelsior and stuffed it inside the large cylinder. I cut two pieces of 6" galvanized flashing and wrapped  around the the tops of the two cylinders and wired them in place. The trough made by the two pieces of flashing will help direct the water down through the excelsior.
Looking like a raku kiln.

Now I needed a place to collect and distribute the water. I used a #3 galvanized tub for this. I made a drain from a garden hose and bolted a 3" X 3/8" carriage bolt through the middle sealed by rubber washers and silicone sealer. This will hold the recirculating pump.

Here is the cooler pump I got for $12 on eBay. A fountain pump would work as long as it pumps at least 250 gallons per hour. I used a piece of old washing machine hose and a piece of garden soaker hose for plumbing as well as a brass "T" coupling

I made a screen wire basket to help keep junk out of the pump then bolted it to the bottom. The bricks will hold the two cylinders off the bottom so they can drain water back into the sump.. The washing machine hose is attached for the water distribution hose.

A circle of soaker hose was cut to fit between the cylinders and additional holes were drilled at about 1" intervals. I found that the drilled holes in the porous hose tended to close up when the hose swelled with water so I eventually reopened the holes  with a  red hot icepick.

Here's a look inside. The pump is connected to the soaker hose that is now nestled in it's place atop the aspen excelsior mat. Water is pumped to the hose then it trickles back through the excelsior.

A piece of pipe insulation is placed on the outside cylinder. it is split so it just wraps around the top. This will be a cushion and a gasket for the blower.

My blower is  made from a power roof vent just like this one. I had it on hand to vent the toolshed. That project will have to wait until fall

The dome cover is removed and the vent is placed on top of the cooler. You could trim the flashing round if you like but I still intend to install it on the roof someday so I'll just leave it square. Not shown are the bunggee cords I used to get a snug fit all around. You  don't want  the blower to be  able to draw air from anyplace other than the inside of the cooler.

The opening on the blower is 15" and I wanted to be able to direct the air where I needed it. 15" duct work fittings were very expensive so I looked for an alternative. Tractor Supply had plastic flower pots on sale for $2.99 and they were 15" diameter at the top.

I cut one side out and placed it on the blower. I can turn the planter and direct the air where it is needed.

To fill the RAKOOLER with water I just pour about 4 gallons of water in the tub and start the pump. about 5 min. later I start the blower. Deliciously cool air fills my work space. I keep a 5gallon pail of water next to the cooler and pour in another gallon or two when needed. currently it evaporates between one and two gallons per hour. I may add a float valve and hook it up to water someday but for now it isn't much trouble to add a gallon or two of water when needed. Every other day I add a cup of bleach to the water in the morning to be sure it doesn't start getting moldy.

Performance: I use this cooler to cool an area of my shop. The shop is a garage and has little insulation so cooling the entire space isn't effective. It will cool my immediate work area about 15f. at 30% humidity. It feels cooler because of the breeze it creates. It is efficient up to about 40% humidity. It is at it's best with about 20% humidity or less. Before the cooler I could only work in the shop until about 11am. Now I can work all day without being overheated. It must be operated with incoming fresh air so I leave the walk in doors open. With a bit of tweaking you can at least be comfortable when the temp. is 107f. outside. This isn't refrigerated air conditioning but it's a lot cheaper to operate and it does make a difference. In the evening when the temp drops to 90f. the air coming out of the cooler is almost chilly.

Posted by Wildmud at 9:18 AM No comments: Links to this post

Here's Bubba-Sue. She's all made up and headed for Wal Mart.
She was thrown on the wheel from a red clay I dig here on the Red River. She was painted with underglazes and will be glazed with a clear glaze before firing to cone 6.

Posted by Wildmud at 3:59 PM No comments: Links to this post

It's Been A Long Hot Summer Without A Drop Of Rain

Every summer I make a Greenman jug to celebrate the season. It is usually covered in leaves with a cool green glaze. This summer is a bit different. Daily temperatures have been in excess of 100 for 30 straight days without any rain or any sign that it will cool down in the forseeable future. The garden is dying despite my best efforts to shade and protect plants from the relentless sun. This years Greenman is parched and begging for rain. Those clouds over his head don't look promising.
He is made form clay that I dug on the Red River here in Southern Oklahoma and will fire a reddish brown. 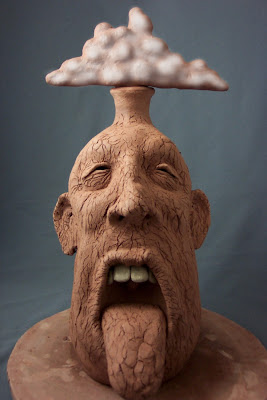 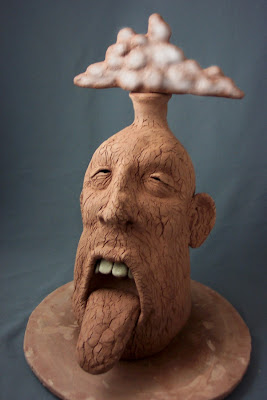 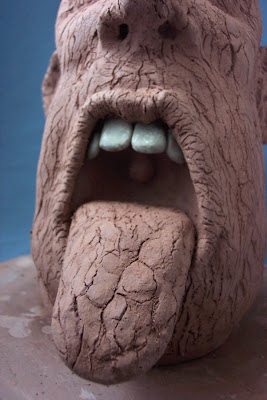 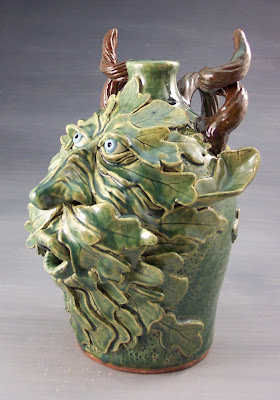 Posted by Wildmud at 4:57 PM No comments: Links to this post

Work in progress:
This is only the second caricature of a real person that I have attempted.
Salvador Dali had a lot of character in his face and I have been exploring different shapes and structures for my face jugs recently. Dali was an eccentric and a shameless self promoter. If he had chosen pottery instead of painting I'm positive he would have made face jugs and sold them on eBay. 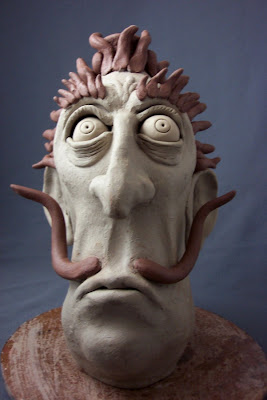 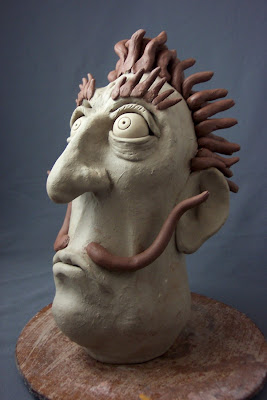 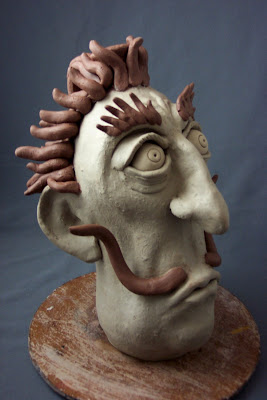 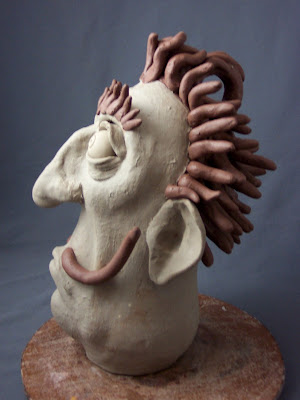 Work in progress:
Where would a "Toad Licker' likely leave his liquor?
Locked in his liquor locker inside his "Toad Licker" liquor jug. 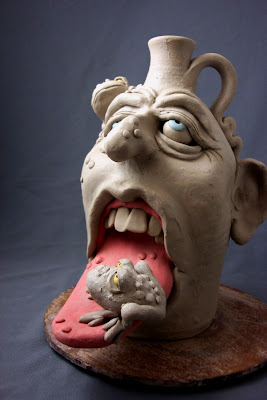 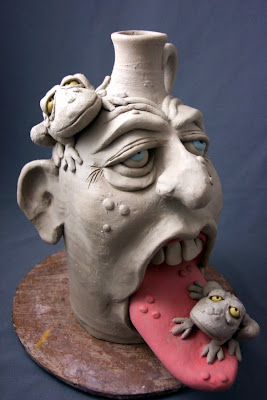 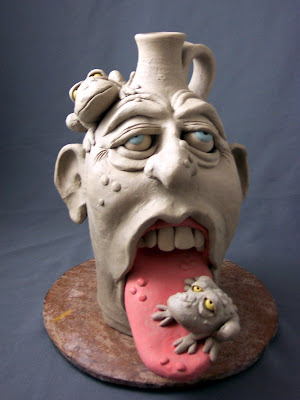 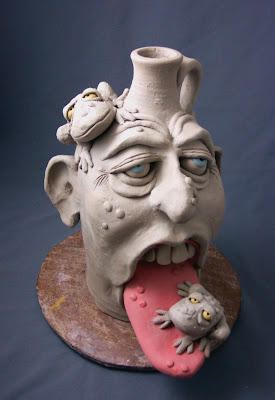 Works In Progress:
Here are some Face Jugs that I am working on.
I wanted to do a series of animals and was having a hard time incorporating the spouts of the jugs.
I decided to camouflage the spouts as hats. The hats turned into party hats.
I think the 108 degree heat has driven me mad! 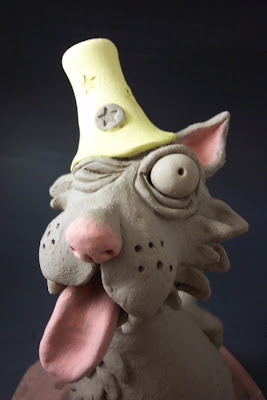 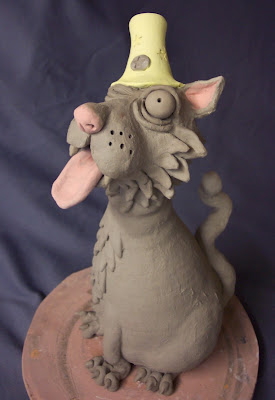 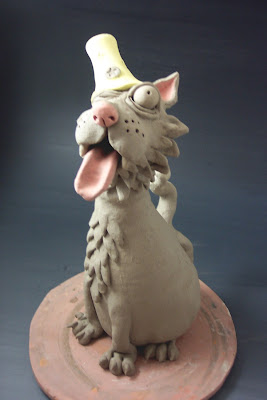 Watch Dog.
He's really a mellow pooch but when he has one-too-many cocktails he cops an attitude.
Or maybe the stupid hat just  pisses him off. 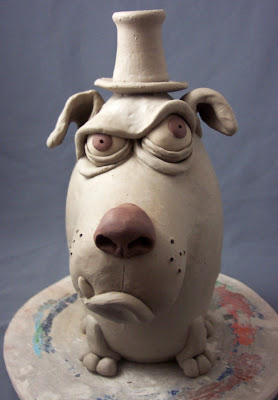 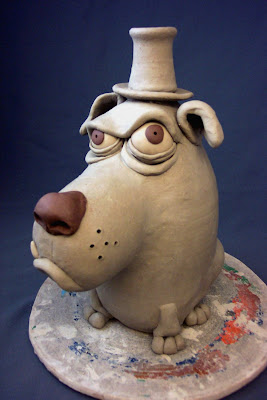 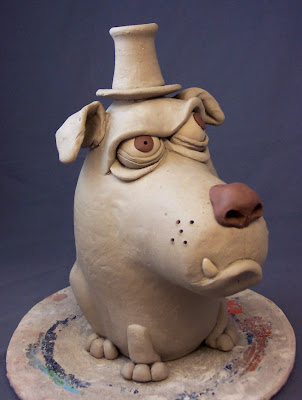 Posted by Wildmud at 8:02 AM No comments: Links to this post