ANGELS OF THE MOJAVE

Stories Of The Road.

I have spent most of the last 50 years as an artist/potter. Most of that time was dedicated to selling my wares at Art shows all over the country. In my travels I have encountered some weird, funny, frightening and surreal people and situations. I thought I would share some of them with you. They are in no particular chronological order.


Angels Of The Mojave: ca. 1998.
It was summer and we lived in Tucson Arizona. The show scene in the southwest was dead for the summer due to the heat, If I wanted to make a living I would need to seek venues in more moderate climes. I was headed to the San Francisco Bay area for the Los Altos Art And Wine Festival. My old 1983 Ford van was loaded to the top with pottery and display materials. Hopes were high for a successful show.


I cut across the Mojave desert in order to bypass Los Angeles. The old Ford was running fine through San Berdoo and Adelanto. I was making good time. I turned west onto highway 58 at Kramer Junction and headed for the town of Mojave, some 30 miles distant.


Just as I passed Boron the Ford started acting up. I noticed that it would seem to bog down and starve for fuel if I pushed down on the throttle too hard. It was still working fine at cruising speed so I decided to make it to Mojave where there were auto parts and services. The situation was getting worse. The van was getting slower and any throttle above an idle would cause it to starve for fuel. The fuel pump was giving up. I was down to idling along at 20 miles per hour. Just as I decided to take the next chance to turn around and make for Kramer Junction the worst happened.


Road construction! The highway narrowed to a single lane in both directions. Concrete barriers were set to funnel traffic to one lane. The barriers were set up on either side of the lane to form a corridor that was about 10 miles long. There was no place to pull onto the shoulder or exit this corridor. I was stuck nursing a sick, ever slowing, vehicle with no place to get out of the way. I felt truly sorry for my fellow travelers stuck behind this, now 15 miles per hour, Tortoise. In this case the Tortoise would have to finish first before the Hares could resume California speed. Oh yeah, those horns really helped speed me up.


Close to 45 minutes later we emerged from the concrete tunnel. I pulled off the road at the first wide shoulder I came across. I exited the vehicle and faced the traffic that had been bottled up behind me. I shrugged my shoulders, meekly waved and mouthed , "I'm Sorry”. I was greeted with honking horns, rude hand gestures and a string of nasty epithets being hurled in my direction. I have heard all those words before but not in such creative combinations.

As the angry circus parade faded unto the distance I turned to the problem at hand. I loosened the fuel line and turned the key to engage the starter. Barely a trickle of gas seeped out. I needed a fuel pump and the only place to get one was Mojave and Mojave was 10 miles away. Cell phones were not as common as they are today and I didn't have one.


I put on a bright red T shirt (for better visibility) . I grabbed the warm half-bottle of Dr. Pepper and with Sammy Davis singing, “What Kind Of Fool Am I” ,(in my head), I started walking towards Mojave. The town in the distance seemed to dance and shimmer in the heat waves rising from the asphalt. My gray hair and full beard were wildly disheveled by the desert wind. I couldn't imagine anyone would offer me a ride. In fact I would be suspicious of anyone that would offer a ride to someone that looked like I did. I was happy that my wife and son hadn't accompanied me on this trip.


I had only gone about 50 yards from the van when a pearl white Cadillac sedan passed me then slowed to a stop about 100 feet down the road. I wrestled with mixed feelings of elation and apprehension as I approached the Caddy. Was this a golden chariot sent to deliver me from this treacherous desert ? Or was it something more sinister?


I approached the car cautiously. The heavily tinted passenger window slowly rolled down. When I peered in the window I was stunned. Inside there were no gang bangers, serial killers, highway robbers or kidnappers. There was only a young mother and her daughter of about six years old. The mother asked if I needed help. I told her my story that I needed to get to an auto parts store in Mojave. She said,“We're going that way”, as she unlocked the door and invited me in.


We introduced ourselves. The mother was Ruth and the little girl, in the back seat, was Angie. As Ruth pulled the Caddy back on the road she said, “I hope you're not a serial killer. When we passed you Angie said, “You're not going to let Santa die are you mama? So I just had to stop”.
I assured her that I was just a crazy potter on my way to a show. I spent the next few miles explaining to Angie that I wasn't Santa but that I would put in a good word for her if I ever came across him. I certainly felt like it was Christmas right now.


The store was well stocked and the new fuel pump was in my hand within minutes. My mind turned to the question of how to get back out to the van. I would need more water to drink if I were going to walk ten miles in the desert. I figured that no one was likely to give a lift to a guy carrying a fuel pump while walking in the desert. I spied a display of plastic gas cans and hit on an idea. People might be more likely to stop for someone that had run out of gas.

I bought a one gallon plastic gas can and filled it with water (killing two birds with one stone).

It was time to test my luck. I left the parts store and trekked the eight blocks to the city limit sign. With some trepidation, I crossed the threshold and was once again on my own in the desert.


I had only walked about one hundred feet past the city limit sign when an old pickup ground to a stop beside me. A grizzled old face hollered, “Hey...... you need a lift? It's a bad day to go for a stroll in the desert. Hop In.” He said his name was Jacob, but everybody called him Jake. He was on his way to work at the borax mine and was late. I feared his truck was in worse shape than my van. It shuddered, wobbled and groaned as we sped along at 85 miles per hour. It only took a few minutes to cover the ten miles to where I left the van. He slammed on the brakes and we came to a grinding squeaky stop. “ I'll have one of the guys from the early shift check on you. Good luck and adios”. He was gone in a cloud of dust and a shower of gravel.


Replacing the pump was not a hard job it just required a lot of crawling around with the ants and a few well placed cuss words. A half hour later I was on the road again. The old van was running like new.


The rest of the weekend went smoothly. The show was profitable and the ride home uneventful.


Every time I lose faith in humanity. (which is often) I think of the three angels of the Mojave and I feel better.

Posted by Wildmud at 5:38 PM No comments:

Making some mini face jugs. The first two sold and are on their way to their new home. I don't know how many I will make. They are not much easier than the large jugs. They require special care when throwing and greater attention to detail.
However, I have been asked by some of my collectors to offer some mini's for their collections so I embark on a new adventure. They are signed or initialed on the bottom (as space allows). 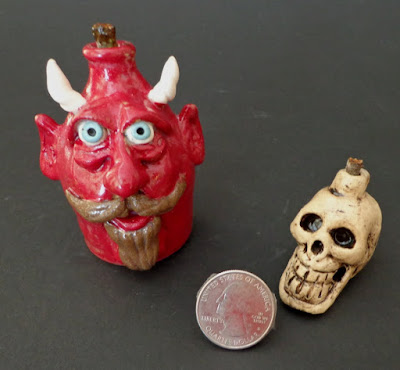 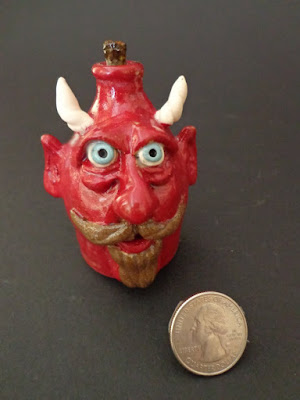 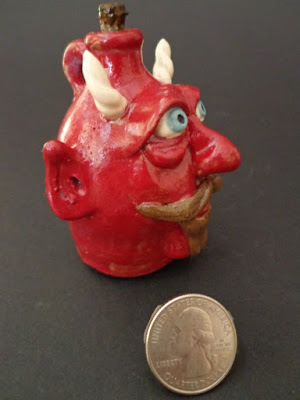 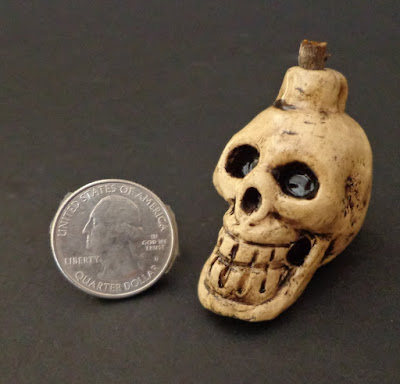 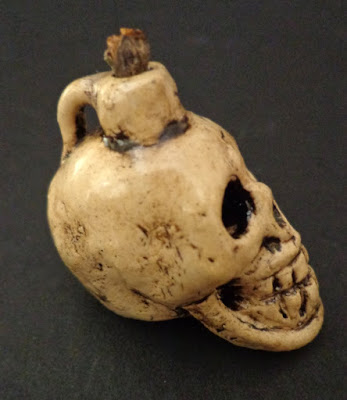 Quadruple stacker just out of the kiln

Big Stack Of Trouble.
These young demons are out looking for trouble
and mischief to get into. All the pranks and
dirty tricks they can conjure up are fair game.
This is the first quadruple stack jug I have ever made.
It stands about 19" tall and is fully functional. 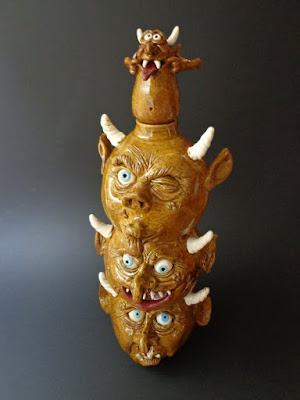 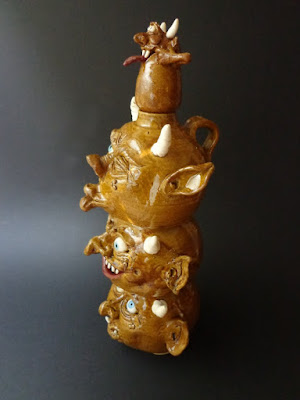 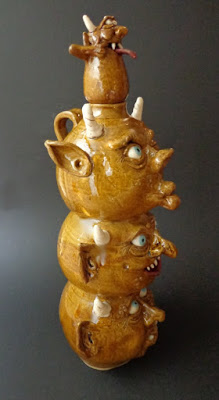 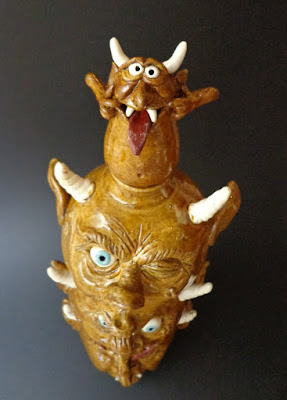 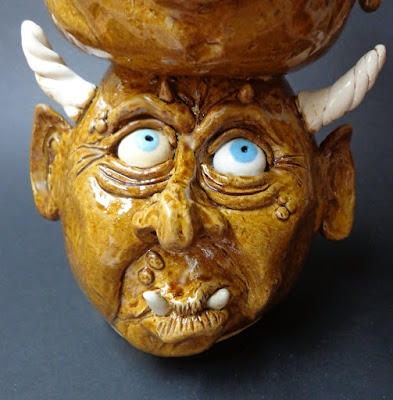 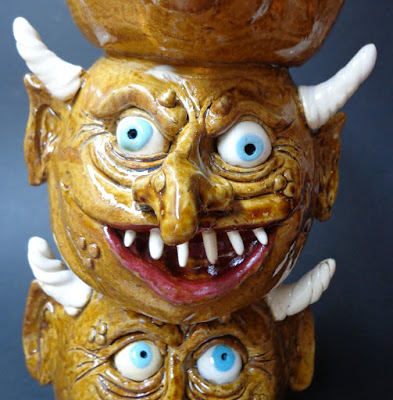 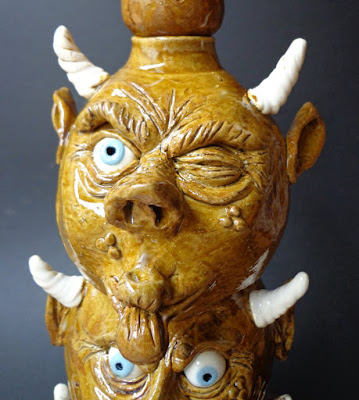 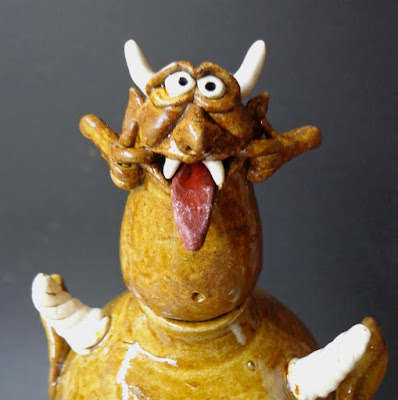 Big Stack Of Trouble.
These young demons are out looking for trouble and mischief to get into. All the pranks and dirty tricks they can conjure up are fair game.
This is the first quadruple stack jug I have ever made. It stands about 19" tall and is fully functional.
Posted by Wildmud at 9:35 AM No comments:

Wow it must be Christmas instead of the first day of Spring. Just unloaded a nice kiln load of jugs. They all came out good. 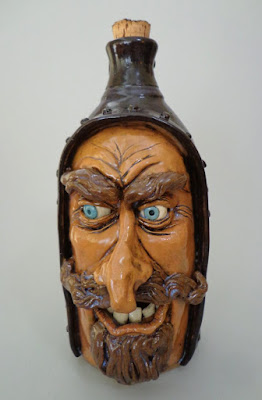 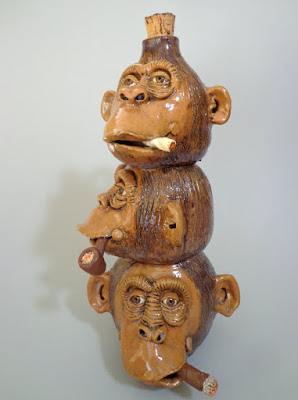 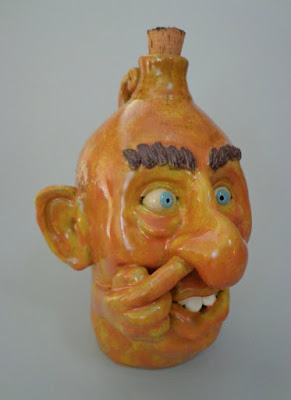 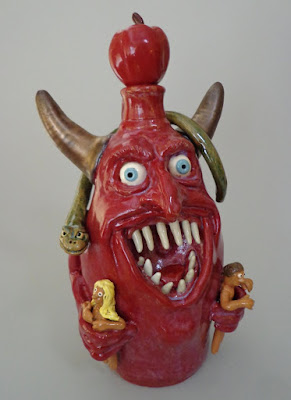 Posted by Wildmud at 6:04 PM No comments:

A work in progress. "Devils Playthings 2". There is naked Adam and Eve, the Devil, the apple and the serpent. The cast of characters is set for a little showdown in the Garden of Eden. 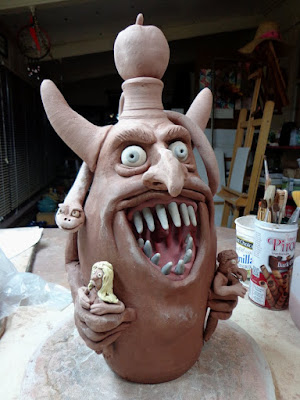 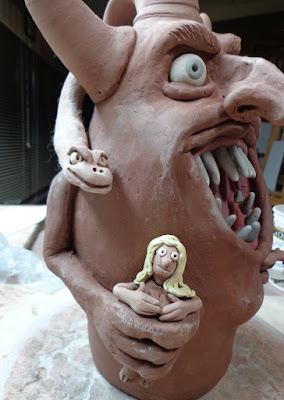 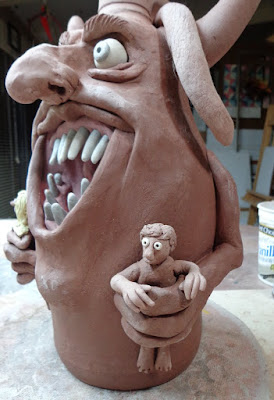 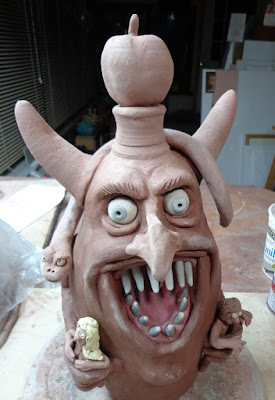 Posted by Wildmud at 4:18 PM No comments:

Working on a smoke stack of monkeys. (or a stack of smoking monkeys) Don't know what the little dude on top was smoking but he did just return from a trip to Colorado. 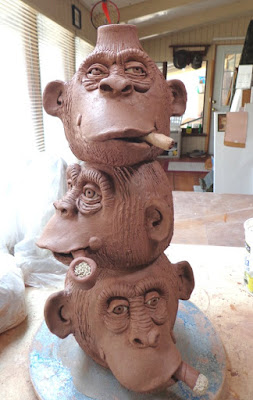 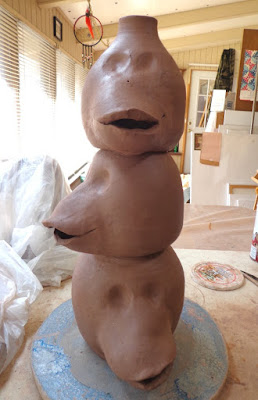 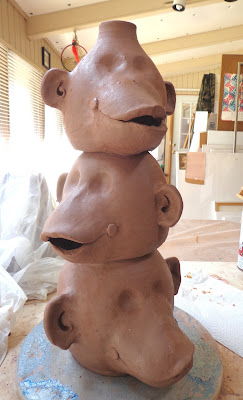 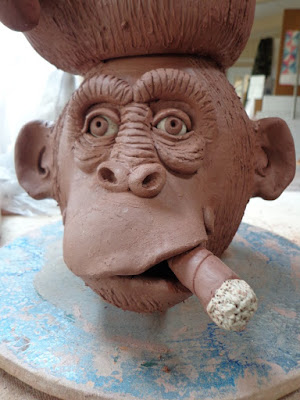 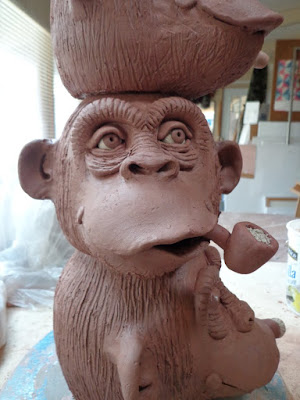 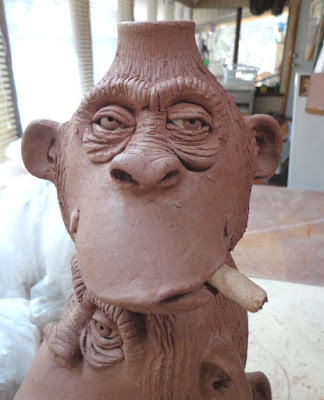 Posted by Wildmud at 6:40 PM No comments: